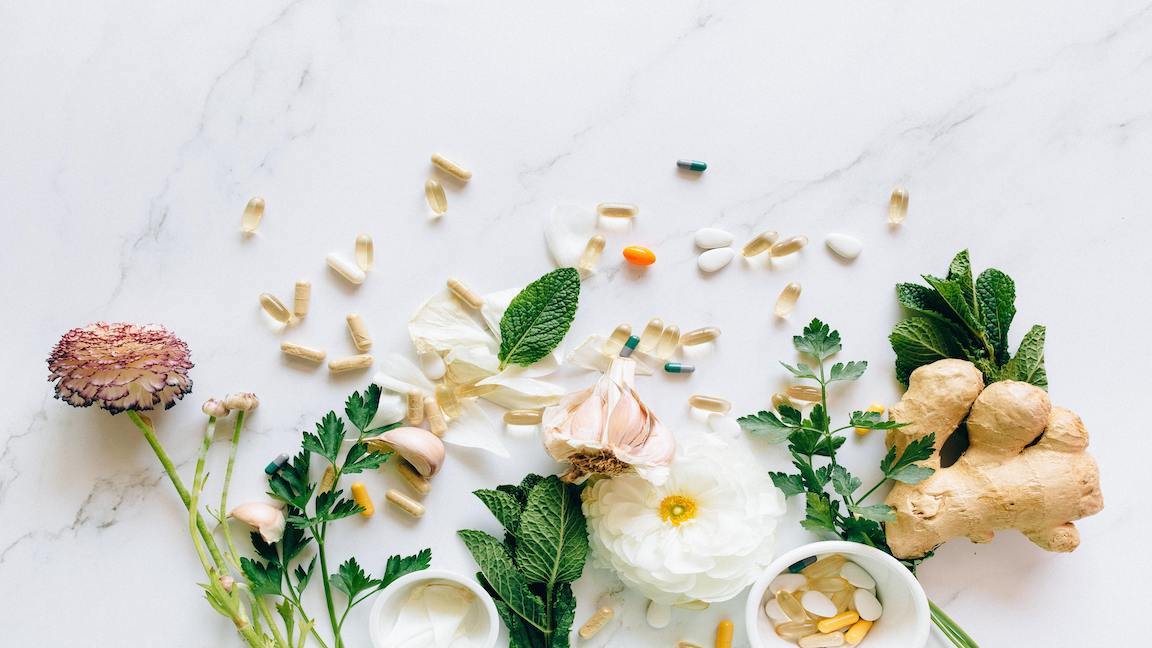 WHAT IS THE HUMAN MICROBIOME?

The term was suggested the term human microbiome was suggested by Joseph Joshua Lederberg. He really described the collective genome of all of our microflora that we have and the idea that we're a comprehensive, really genetic view versus just human. Kind of what he put forth as far as the microbiome. So microbiome here in my talk are basically composed of everything that's not human on your body or in your body.

So this is an interesting fact. One hundred trillion basically non-human cells with non-human DNA on or in us versus 10 trillion human cells with human DNA. So you really can think about it. We're not truly 100 percent human. We're 90 percent microbes. When my kids going to get misbehave, I tell myself, “They're not completely human.” It seems like they're not human at times. But they're good kids.

THE DIFFERENT SPECIES OF MICROBES

So I want to introduce some terms. There's generally different what we kind of put many of the different species into general sort of categories:

One of the common examples, is C. diff. C. diff basically that the patha balance overgrow the good bacteria in the colon, leading to C. diffile. And that's a disposes hort of shift. You have all three types of bacteria in your GI tract, and it's this balancing act between them.

THE MICROBOME CHANGES DEPENDING ON LOCATION

CAN YOU MEASURE THIS?

Well, you can actually measure this now in both yourself and in your patients. This is the Human Food Project. I've actually done this. You can take samples yourself, send them in, and basically you get a result panel. And so it's interesting because you can see what species are prevalent and also how you match up against the average person for the United States that sent their samples in.

So we're trying to collect this database because we really don't know what normal is. And it really has to do with a lot of other factors. What your diet is, where you're living, where you've traveled, what pets you live with – multiple factors affect your microbiome. So that's the microbiome. That's what's living within our gut. So how can we potentially alter the microbiome to cause benefit to our patients?

Traditional Western medicine actually suggests that we should be killing bacteria, not giving our patients bacteria. It seems counterintuitive. So what do you think the criteria for defining probiotics are?

All the above. The point is starter cultures are used to make yogurt like Lactobacillus bulgarius and Streptococcus thermophiles are safe, but they're not probiotics because they haven't really been shown to demonstrate human benefit. And so that's the point there. Not all bacteria, not all yogurt necessarily, are probiotics.

THE BENEFITS OF PROBIOTICS IN SURVEYS

But what do we think as providers? This is an interesting survey, I haven't found a good updated version of this yet and it may be useful to do that because as of now, much of the data's emerging that's positive. But this was actually a GI practice in a large metropolitan area in the Midwest. And what the survey showed was the GI doctors thought, “Oh, they're safe for most of our patients. Hundred percent, they're safe.”

But 98 percent felt probiotics had a role in treating GI disease. About 93 percent had felt like their patients are currently taking them. This is the most common ones and most common indications. But the thing that was incredible was most believe their practice was not supported by scientific data. In 2010, we didn't have a lot. We did have some. But it's starting to emerge more and more that probiotics can be beneficial for specific disease states.

But there are some caveats that, no, not all probiotics are the same. Although I told you for antibiotic-associated diarrhea, I read pretty much good to use anything. Not all probiotics work for everything. Mechanisms are key. Also doses and strains.

Let's get into some of the data and different disease states you can recommend for your patients yourself or whatever your family members where you can use probiotics to benefit human disease. So they actually did a systematic review recently. It highlights the point that lots of studies have been shown to look at vaccine response. And what you can see is there's a number of them that had increased in vaccine response, a number of them that had no change in response, and only a couple that had a decrease in vaccine response.

So basically, what the point is here, very few studies showed a negative, if you will. Some didn't show much difference. But there are a number that show positive benefits. So they're really not going to harm your patients.

The answer is B and C. So, you get the theme: I'm very pro-probiotics.

So how about antibiotic-associated diarrhea? Eighty-two randomized controlled trials. These are a lot of early studies – This came out in 2012 in JAMA. A lot of these studies that the probiotic strains were poorly documented in that the actual studies, which is is kind of crazy. The main question: is antibiotic-associated diarrhea preventable? And when they pooled all this data, they found that certainly the probiotics favor intervention, meaning favor the probiotics.

But I would recommend that obviously to your patients. I think this is low risk and easy potential prevention of both C. difficile, and antibiotic-associated diarrhea. There’s also pretty good data for probiotics and obesity.

This is actually interesting. A multi-centered, randomized controlled trial of eighty-seven overweight and obese subjects looking at visceral fat from the C.T. scan. And these individuals were randomized to either receive fermented milk containing lactobacillus species versus just straight fermented milk. They got it for 12 weeks and then they reimaged them.

What they found was a significant decrease in abdominal, visceral, and subcutaneous fat in the probiotics versus control. And there is a decrease, and they tracked that, although diet dialogues aren’t  great. They didn't have any great tracking tools. This is 2010. But they did have similar diets, and there was a slight decrease in weight: 1.4%. And again, everyone wants a magic pill, but I think probiotics certainly can be part of a good, healthy diet for sure.

What about prebiotics? They get left out a lot. A lot of the studies I showed you were just strictly probiotics. I always thought, you know, I put that petri dish at the bottom because this is it's like your growing bacteria in your high school class. You need the petri dish to grow the bacteria. If you don't have a good food, the bacteria won't grow. So it's the same sort of thing.

What are the criteria that define a prebiotic?

So there are hard criteria for what truly constitutes a prebiotic. There’s also different areas of mech of action with the different sources. And so that's something to consider as well. For our short bowel patients, sometimes we consider this because some of them don't have a complete colon. And so there's no sense in giving them effervesce in high doses because they don't have a sending colon. So these are just things you can consider.

So what about Syn-biotics? When I think about delivering probiotics like my dad was talking about with the antibiotic-associated diarrhea, I really think about giving some prebiotics. Making sure he's getting some good food sources with the prebiotics when I deliver the probiotics. Because what happens is the probiotics stumble through the stomach and can resist a little bit, but some of it's going to be killed off. And then it starts going through the gut, and a lot of it is going to be lost there. So what you want is you want enough of this to get to where you want it to work. Usually the distal, small intestine, the colon.

How do you deliver it? Is it better to take it as a pill, capsule, or in food? And this is a common question. And there's only one really study that's looked at this, and this is not published yet. And they actually measured they did much of studies. It's gonna be a great paper. But what they found was it was better to deliver the probiotics in yogurt.

So they did the same doses in capsules as yogurt. What they found was it both worked better to treat patients antibiotic-associated diarrhea giving it through the yogurt versus the capsule. But there are other benefits, too, right? I mean, people perceive eating real food is better than taking a capsule. Most of our really health-conscious patients want to get things from food sources. And that's the way I think we should do it.

ARE THERE ANY NEGATIVES TO PROBIOTICS?

There are problems with probiotics like any other complementary, alternative medicine. What's in the label? Most of these sources are not labeled correctly. When you pick up a carton and you look – OK, what's in there? Well, it's like when they did this study of 14 different products, almost all of them were incorrectly labeled. Half of them had contaminants when they tested them, and 36 percent didn't actually list the strains, which again, I was showing you it’s very important. Same sort of trend here in 58 products from the European Union as well.

Curative versus supportive. Right. This will cure antibiotic-associated diarrhea because that's an FDA sort of claim that you got to go through and get, “This is a company alternative-type, supplement-type of therapy.” So they can easily put those sort of claims on their products.

It's all about risk-benefit. So one question is, are they dangerous? I showed you that vaccine enhancement. There are only two studies that showed a slight decrease in immune function. I've actually pulled those studies. I suspect there are probably some issues with them, but they're lots of studies I've shown you. Most of these have shown that there's really no harm to probiotics if they're true probiotics. By nature, they have to give you a benefit.

It's you know, so the one that's interesting is this Saccharomyces Boulardii, which is in a lot of fermented products. This is one that's not a true probiotic, and there's been a couple of studies showing that there are some fungal outbreaks in the ICU. So it's not truly a probiotic.

There may be some little bit of caution in immunocompromised patients. I have kind of a pause for those individuals. I may not be as energetic about throwing probiotics their way and also severe pancreatitis. There is one study that showed that actually increased morbidity. So that's another probable group of patients. I may have some caution. Otherwise go at it.

The benefits of probiotics depend on the strain, the number of colonies, the combination with probiotics – there are no factors of whether or not they're going to be successful. They've been really shown to prevent and improve antibiotic-associated diarrhea and also potentially C. diff.

There may be an enhancement of immune function. Trust me, during the winter, my kids are getting sick, and they're coming home. I'm taking a cup of good probiotic Kefir every day to try to ward off their germs. Although it seems like my kids’ germs fight right through those probiotics.