The Importance of Compassion: Compassion in the Hospital Setting

In a John Hopkins study, 56% of physicians surveyed said they don't have time for compassion – but that is what your patients need the most. Learn how compassion betters hospital care 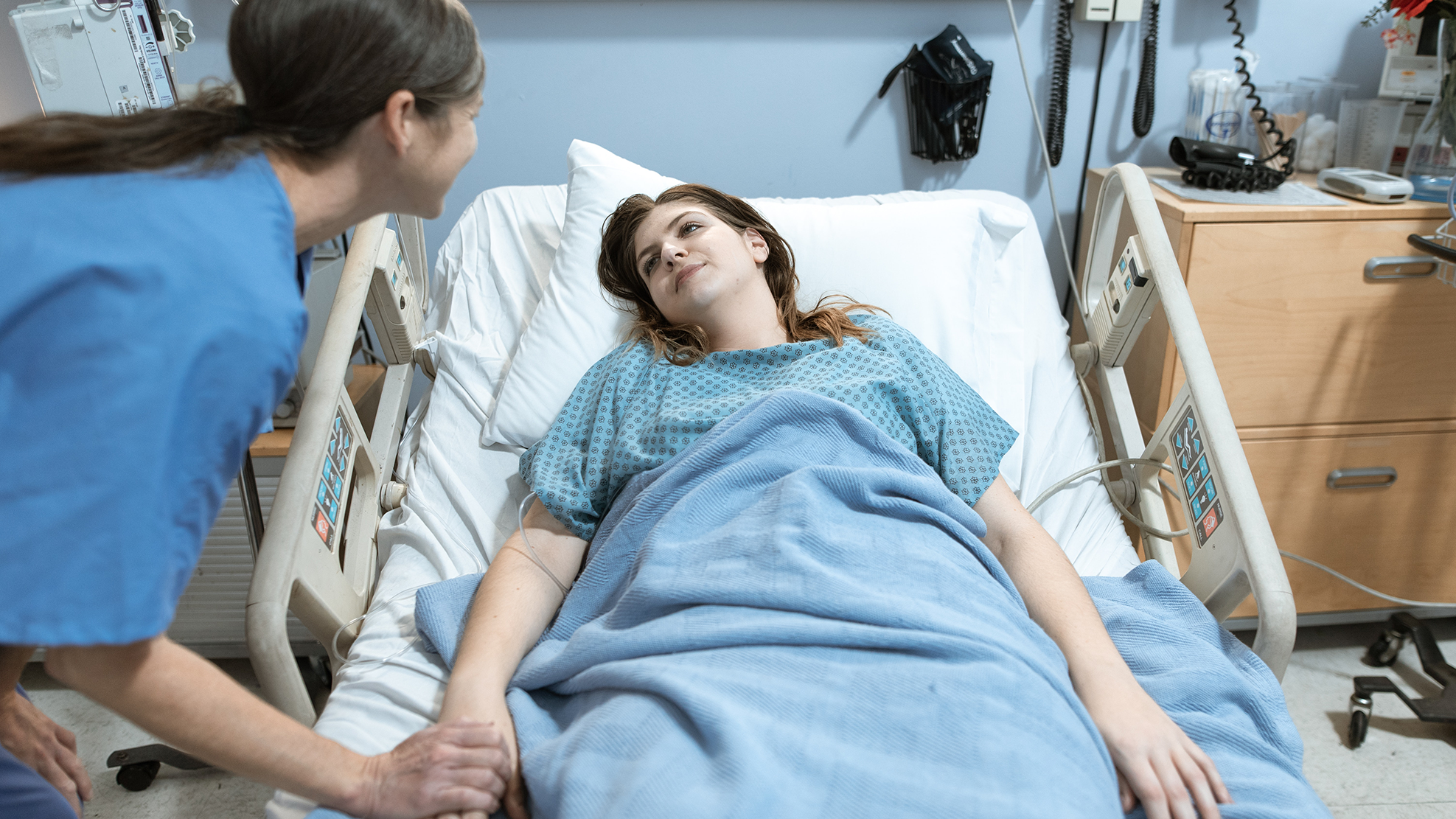 HOW YOUR PATIENTS ARE FEELING ABOUT MEDICAL VERNACULAR

It becomes kind of a word soup. We have MDs and RNs and LPNs and PharmDs and RTs and DOs. A lot of times when we take care of people, we throw around those letters and those titles, and the person who we are caring for it doesn't always know what those things mean. And when we go about caring for people, one of the first things we do is a history and physical exam, an H and P, so we continue with the word soup. And the H and P has its own parts, which sometimes we refer to in front of the people we're taking care of, and they don't always know what those things mean.

We do diagnostic tests, the AST, the CMP, the BNP, the CBC, the CBC with diff., so forth and so on. A long, long list. Those diagnostic tests, which are a word soup, lead us to diagnoses, COPD, CAD, and that can be alienating, but not alienating enough, because then we do things to people.

HOW YOUR PATIENTS ARE FEELING ABOUT YOU AS A STRANGER

We put in tubes, J-tubes and G-tubes and NG-tubes and NJ-tubes and catheters, Foley catheters, and we put in needles and all kinds of other therapeutic interventions that have names and abbreviations that further alienate the people we take care of. So this can be scary just from a language standpoint.

And then, if you add to that, we don't know any of the people who are taking care of us usually in the hospital, and we're not on our home turf. We’re in a sometimes cold building that's not especially luxurious or comfortable. We're asked to wear a gown, which is not only not very fashionable, but it's also not very warm. And so we can be scared and then we're asked to give consent.

HOW YOUR PATIENTS FEEL ABOUT THE SURGERY

We're asked to give consent for more things to be done to us. We sign forms that say, “Yes, I don't know you. I don't know anything about where I am. I don't speak the language I'm listening to. But sure, I give you consent, stick a needle in my skin through the fascia into my blood vessel, draw blood out of my body. I give you consent. Absolutely.

Sure, you have permission to draw cerebrospinal fluid out of my son's back. This is really scary for people who are hospitalized.

We take on an enormous responsibility when we hospitalize people and take care of them. I'd like to just pause and zoom way out. In the beginning, we didn't have consent or hospitals or providers or patients. We didn't have any of that.

In the beginning, there was this place, Earth, and in this place, there was beautiful life. And sometimes being alive was, actually often, being alive was hard. And so, we needed a way to cooperate and to protect the weak and those who suffer. We can all agree that this phenomenon, which we call compassion, is elemental to our existence.

THE HISTORY OF COMPASSION

Compassion transcends generations and cultures and species. It's central to every one of the world's major religions, and yet, it doesn't require religion at all. It's multisensory. It interacts with the parasympathetic system. And it involves love,l. It benefits both those who suffer and those who help to relieve suffering.

It pre-dates and will outlive anything that today we call health care, and it's what you will want when you have nothing else. We are born more prematurely and dependent than any other mammal. We are wired to relieve suffering. So what do we mean when we say compassion?

THE PSYCHOLOGY AND PHYSIOLOGY OF COMPASSION

Compassion is an emotional response to another person's pain or suffering that involves an authentic desire to help. Its own emotion. But it's not empathetic distress, even though it's related to empathetic distress. And it's not love, but it involves love. It's not sadness, but it recognizes sadness.

People whose parasympathetic nervous systems are activated find it easier to provide compassionate care, and when people's sympathetic nervous systems are activated, it's quite more difficult to provide compassionate care. In humans and in non-humans, a soothing touch can activate reward centers in the brain, lower cortisol levels, and reduce stress and anxiety in anticipation of feeling pain.

THE HEALTH EFFECTS OF COMPASSION

Studies have found that diabetic patients who receive compassionate care actually have better glycemic control. Patients who are cared for in the context of a common cold, exhibit an enhanced immune response, and a shorter duration and lower symptoms of severity when they receive care that is more compassionate.

Compassion also lowers the blood pressure and lowers the heart rate, suggesting along with evidence from vagal tone measurement and association with the parasympathetic autonomic nervous system, a lot of this may sound intuitive.

But if you ask health care providers about their capacity to provide compassionate care in the middle of a busy day, more than half, 56% of physicians surveyed, will say that they actually don't have time for compassion. They have too many other things to do.

A STUDY ABOUT COMPASSION AND ANXIETY

There was a now-famous study conducted at Johns Hopkins University on people who had advanced lung cancer. The intervention was just to offer compassionate words. The endpoint that was measured was anxiety.

And the words they offered were not especially complicated. They said, “I know that this is a tough experience to go through, and I want you to know that I'm here with you and that some of the things that I say may be difficult to understand, so I want you to feel comfortable stopping me if something I say is confusing or doesn't make sense. And we're here together and we'll go through this together.”

And then, at the end of the consultation, that oncologist would say, “I know this is a tough time. It's a tough time for you, and I want to emphasize, again, that we're in this together and that we’ll be here with you at every step of the way.” Compassion significantly lessened anxiety in those patients. It took about 40 seconds to say those words. And there aren't many things in healthcare that we can do in 40 seconds with no adverse side effects that just help people feel better.

HOW IS COMPASSION DIFFERENT FROM SYMPATHY OR EMPATHY?

People who are cared for were asked about what sympathy means to them and what sympathetic care feels like to them. And actually, sympathy was associated with pity, with basically being observed and felt sorry for. Empathy was more about feeling, about trying to understand the other person's experience or as is famously described, walking in the other person's shoes — but it still wasn't compassion.

HOW WE CAN BE MORE COMPASSIONATE

A supererogatory act might be going to the local store and getting kimchi for the Korean lady who misses it, having had hospital food for the last however many days or weeks.

WHAT YOU HAVE TRAINED FOR

They may have involved filling out an application, taking tests, taking classes, getting high grades, getting high scores, or getting letters of recommendation. But going through the whole list of experiences prepares you to do whatever you do.

And you probably had to memorize a lot of things, facts, guidelines, procedures, probably had to follow a lot of directions, and we all get pretty good at doing those things. That's how we earned this right to take care of other people in this formal setting in the hospital. But this thing that I've been sharing with you, compassion, you knew about before any of that training.

HOW YOU MOVE FORWARD WITH COMPASSION

You felt it, and you provided it, and you're good at it because you chose to work in this field as busy as a clinical’s day can get. And over the last several decades, we've been driven by billing and electronic medical records and regulation and all kinds of things that distract us from why we wanted to do this in the first place. Remember that the one thing that people really want, no matter what, compassion, is something that you knew about before you did any of this.

It doesn't cost much, and it helps people immeasurably. Even when we've reached the limits of Western medicine, compassion still works. It still helps. It's worth sometimes just allowing yourself to think creatively. We've gotten to a place in health care where health care is big and complicated and hard to access. A lot of times, it's more than we need and it's not enough at the same time, it doesn't cost anything.

Compassion is cheaper than the CT scan or the MRI or kidney dialysis. And it's simpler. It's just good enough for helping someone to feel better, even in the tiniest way. It doesn't replace those big, expensive, complicated, hard to access therapies, but it's easy to access just between you and me, just between a nurse and the person they’re taking care of.

If you can bring this affordable, simple, good, extra bonus to the care you provide, you and everyone else will be grateful and probably healthier. 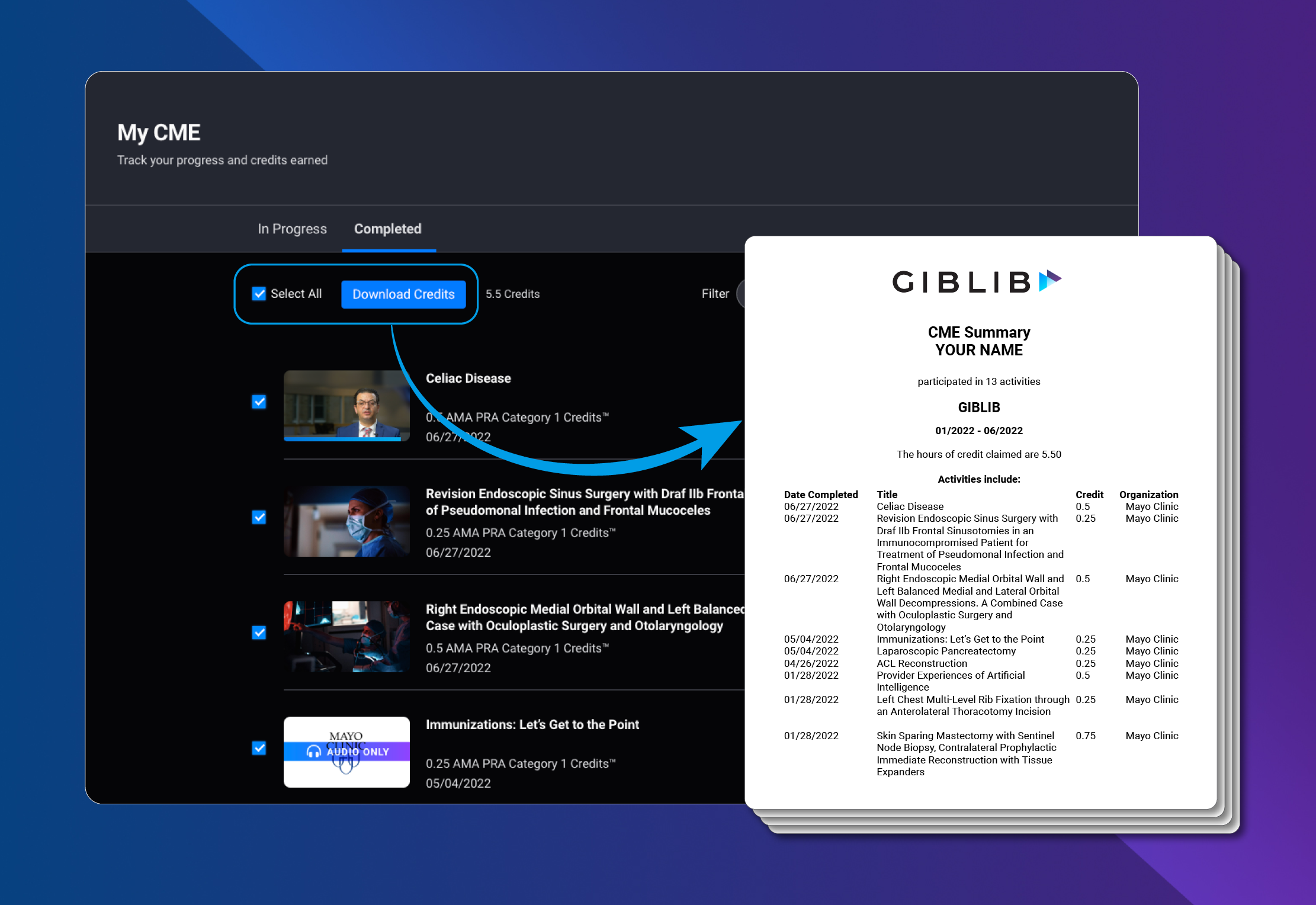 Tracking and submitting your CME just got even easier with our new CME summary function. Simply select the completed CME activities that you wish to download the certificates for, and we will consolidate them into a single PDF, which includes a summary of your activities. 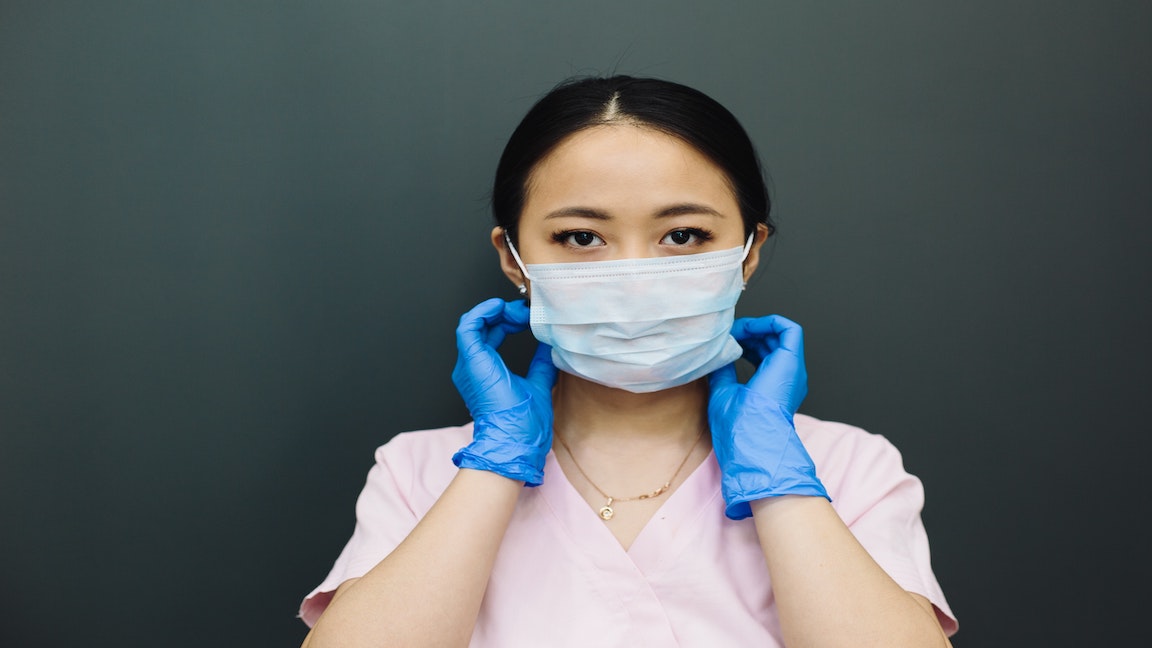 Sexual harassment in health care can have lasting effects on victims, including doctors, nurses and patients. The #MeToo movement has reestablished the need for changes in policy to increase prevention. 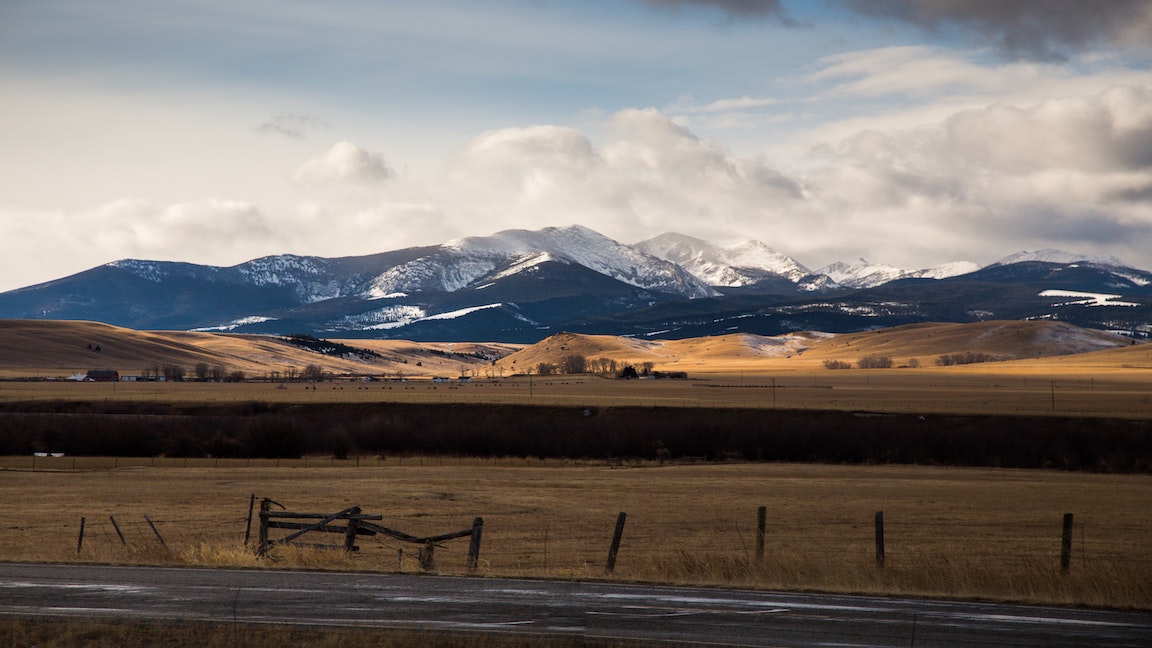 Montana MD and DO physicians, you can fulfill your state CME requirements today by watching the GIBLIB videos listed here.